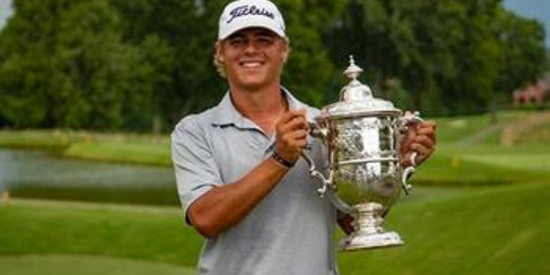 Before an official ball had been put in play, Knoxville’s Lance Simpson had a bold prediction about how things would look come Friday afternoon at Cherokee Country Club.

Seventy two holes later, Simpson stood on the 18th green with the Martin J. Condon trophy between his fingers as the champion in the Tennessee Golf Association’s flagship event. While the celebration was slightly delayed due to a brief weather delay with less than a hole to play, Simpson’s smile after the final putt dropped showed the win was worth the wait.

The young Knoxville-native’s title run really started to take shape on day three. Entering the day tied for the lead with Nashville’s Blades Brown and Shelbyville’s Evan Woosley-Reed, Simpson’s play in the third round was described by some as “unconscious.”

To say Simpson played well would be an understatement. His 10-under-par 60 tied the course record at Cherokee Country Club, as he played bogey-free with eight birdies and an eagle on the par-5 16th hole. Simpson said after his round he started thinking about breaking the course record after that eagle.

He took a six-shot lead into the final round, tasked with just maintaining that to capture his first individual TGA title. Some might have buckled under the pressure, but Simpson had his gameplay set before he even arrived at the course Friday morning.

“I’m just going to keep doing what I’ve been doing all week,” Simpson said Thursday afternoon. “Maybe I won’t be as aggressive and just go for the middle of the greens, but mostly sticking with the same game plan.”

Well, it worked. After making the turn one-over for the day, putts finally started to fall for the University of Tennessee golfer. He finished the back nine 3-under-par to finish the day 2-under-par with a four-day total of 19-under-par 261.

“I knew I just needed to stay patient,” Simpson said Friday after mentioning putts were coming up just short. “Sometimes it’s hard to do that but I knew that eventually those putts would start to fall.”

Someone who saw a lot of putts fall in the final round will soon be joining Simpson on the University of Tennessee golf team. Evan Woosley-Reed, an incoming freshman at UT, fired the low round of the day on Friday. His 6-under-par 64 in the final round was the second best round of the entire tournament, bested only by Simpson’s course-record tying 60 the previous day.

The Shelbyville-native was one of only three golfers to shoot under-par in all four rounds of the tournament en route to his runner-up finish at the 107th Tennessee State Amateur. Simpson and Murfreesboro’s Payne Denman were the only two to also accomplish that feat.

Nashville’s Blades Brown came away with a third-place finish after ending the first two rounds tied for the lead. The 15-year-old played exceptionally throughout the week, finishing at 10-under-par over 72 holes. Brown finished the tournament 10-under on the front nine and even on the back nine at a tough Cherokee Country Club track.

Adam Condello (Brentwood), Tucker Jenkins (Nashville) and Jack Crosby (Memphis) rounded out the top 5 as each shot a four-day total of 9-under-par. Crosby, the State Amateur Champion in 2020, made a push for his second championship with a 5-under-par 65 on the third day.

It was an impressive showing from all the competitors as the Donald Ross designed course proved tricky for the 144-player field, but all raved about the course’s excellent playing conditions even after dealing with weather throughout the week.

ABOUT THE Tennessee State Amateur 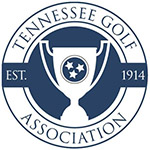 Applications are open to amateurs who possess an active USGA/GHIN Handicap Index of 8.0 or less from a TGA member club or course. An 18-hole stroke play qualifier is required for those who do not meet the exemption criteria. Format consists of 72 holes of stroke play with a cut to the low 60 and ties after the second round.