Semifinals are set at Western Amateur 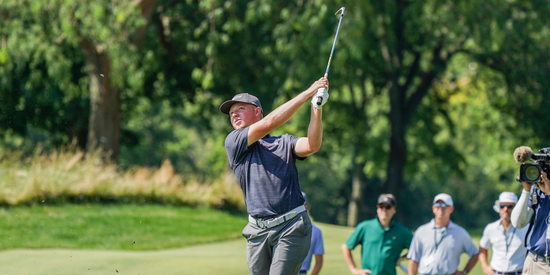 Halfway through his quarterfinal match against medalist Ross Steelman, of Columbia, Missouri, in the quarterfinals of the 120th Western Amateur Championship on Friday, Travis Vick was starting to think about his travel plans.

The 22-year-old from Hunters Creek Village, Texas, was 4 down through eight holes and had just pulled his tee shot on No. 9 well left into the netting surrounding the tennis courts at Exmoor Country Club. Even he thought his time in Highland Park was coming to an end.

“Rough start would be an understatement,” Vick said. “I was asking my dad what flights back home looked great.”

Instead, he took advantage of a free drop and recovered with a flop shot over the tennis courts and back to the fairway, getting up and down for an improbable par to match Steelman. He went on to birdie six of the next eight holes – including the last four – to defeat Steelman 2 and 1 and advance to the Western Amateur semifinals.

Vick will play Mateo Fernandez de Oliveira, of Beccar, Argentina, who beat Cole Sherwood, of Austin, Texas, 3 and 1 in the semifinals on Friday, at 8 am on Saturday. The other semifinal will feature Austin Greaser, of Vandalia, Ohio, who beat Kelly Chinn, of Great Falls, Virginia, 1 up, playing against William Mouw, of Chino, California, who beat Derek Hitchner, of Minneapolis, Minnesota, 1 up.

Saturday’s match play competition will be streamed live on GolfChannel.com and thewesternamateur.com starting at 9 am The championship match, tentatively scheduled to start at 1 pm, will be streamed in its entirety.

Vick started his rally with a birdie on the 439-yard 10th hole and pulled within two when Steelman’s tee shot on the 184-yard 12th found the water. He took control with a torrid birdie streak on Nos. 14-17, taking the lead for good on No. 16 when he flew a nine iron from 142 yards to within a foot for a birdie.

“I figured out a little something on hole no. 11, my second shot, and I went with it,” he said. “I was hitting it stiff, but the putter is what’s really kept me this entire week. I’ve been making a lot of putts, and so I hope to keep that going tomorrow.”

Vick is trying to become the eighth Texas Longhorn to win the Western Amateur. If he does, he’ll join major champions Ben Crenshaw and Justin Leonard as well as rising stars Cole Hammer, who won at Sunset Ridge Country Club in 2018, and Pierceson Coody, who won at Crooked Stick Golf Club in 2020.

Hammer played on the PGA TOUR this week at the Wyndham Championship in Greensboro, North Carolina, but he’s keeping track of his college teammate.

“Cole’s been texting me,” Vick said. “We’re constantly looking at how each other are doing and then we’re constantly sending support to one another.”

Fernandez de Oliveira secured his place in the semifinals with a fast start against Sherwood on Friday afternoon. The 22-year-old rising senior at Arkansas was 3 up through four before he ran into trouble on the 192-yard fifth. His tee shot ended up long and left of the green, and his first chip came up short. He recovered by using a wedge to roll the ball from the edge of the rough into the hole for an unlikely par save to maintain his lead.

Sherwood pushed him with wins on Nos. 15 and 16 before Fernandez de Oliveira closed him out on the penultimate hole.

“Closing the match is not easy,” Fernandez de Oliveira said. “It’s probably one of the toughest parts of the matches. What I told myself was, ‘Keep doing what you’re doing.’ I knew I was still playing well. It was not that I was making any mistakes. So that kept me super calm.”

Greaser, who spent 30 minutes thinking he missed the Sweet 16 cut on Thursday until a few players made late bogeys to get him into a playoff for the final two spots, is in the semifinals for the second year in a row.

The 21-year-old rising senior at North Carolina had to survive a gripping quarterfinal matchup with Chinn. Greaser rallied from an early 2-down deficit with a birdie on the par-5 sixth and a par on the par-3 eighth, then took his first lead with an eagle on the 576-yard, par-5 11th. When Chinn’s 10-foot birdie putt to extend the match on No. 18 slid by the left edge, Greaser advanced.

“It’s good to have another chance at it,” said Greaser, who lost to eventual champion Michael Thorbjornsen at Glen View Club in Golf, Ill., in 2021. “I felt like (the 2021 Western Amateur) was one of my first big -time amateur events that I really made a run and was in contention. I felt like it gave me a lot of confidence that I can compete with anyone.”

Mouw secured the final semifinal spot by outlasting his Pepperdine teammate Hitchner in a back-and-forth match. The 21-year-old Mouw, who won the 2017 Western Junior at Park Ridge Country Club in Park Ridge, Illinois, is trying to become the first Western Junior champion to win the Western Amateur since Jhared Hack in 2007.

Thorbjornsen, of Wellesley, Mass., saw his title defense come to an end with a 4 and 3 loss to Sherwood in the round of 16 on Friday morning. He was trying to become the first player to defend his Western Amateur title since Leonard did it in 1992 and 1993.

Report courtesy of the Western Amateur