It didn’t go to plan for Hollie Doyle and Tempus yesterday. The horse missed the break and had to settle for a seat at the back of the field. He traveled nicely into the race but Hollie had a wall of horses in front of her and couldn’t get the gaps, by the time the gaps came the leader was away and gone. Annoying, but no one is to blame and it’s just an unfortunate thing that happens. I won’t be giving up on him just yet as I thought he ran extremely well in the conditions.

If Aidan O’Brien was to win the Beresford Stakes it would not be a surprise at all, not because he’s arguably the best trainer the game has ever seen, but because he has a ridiculous record in this race, winning the last eleven renewals and 21x since 1996, which is some record. 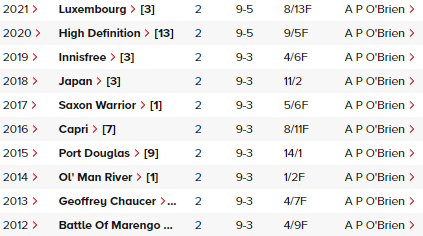 From the picture above (taken from the Racing Post) you can see he has won this race with some of his ‘better’ horses for seasons after their juvenile year. Saxon Warrior was a Guineas winner, Japan was a multiple Group 1 winner and Luxembourg is arguably the most exciting middle-distance horse in his stable as a 3yo. Horses who have won this have tended to come straight from their debut, which is a good sign for my selection CONTINUOUS who is deemed to be the second string of Aidan O’Brien, but I don’t read into the jockey booking too much.

I get the feeling that the race has been the plan for this horse since winning on his debut, or maybe before his debut as he entered this before he won. Whereas, his stablemate and market leader Adelaide River has run one more race than Continuous, where he went to France earlier this month. That suggests to me that this race has only just become a thought and his initial target was his race in France where he finished as runner-up. For that reason, I think Continuous is good odds in comparison. Also, Continuous ran a nice enough debut winning and recording an RPR of 96. Aidan’s 2yo’s normally come on for their run and that’s been the way for a few years now, so for him to come out and run such a nice race on debut is massively encouraging. He still looked like a baby so the month off will be a positive as it would have allowed him to mature slightly more.

A big field handicap in Ireland isn’t normally something I’d like to get involved in, but I think the available odds of CURRAHEEN PRINCESS make her of significant interest. Odds of around 5/1 make her a good bet in my eyes for a horse who has been in the top 2 in the last six runs.

This is a sprint handicap so luck in running will more than likely be required, but the consistent results of this filly can’t be a fluke, and I think she’ll be bang there again in this race on the back of a 3lb higher mark for the recent win. She doesn’t win by much in her wins, which is always a bonus as the handicapper can’t exactly put her up too much, meaning she is always capable of going in again.

She’s clearly progressive and when a horse is like this they should be followed until they completely blow out or don’t get close to winning. She started the season off a mark of 64 and is now rated 20lbs higher. Her trainer N Stokes is only a small trainer but boasts a 27% strike rate from 11 runs, all of the wins coming from the filly. For a small yard, it is important to have a horse like Curraheen Princess, and to land some nice prizes along the way. Today’s prize isn’t massive by any means, but landing a 26k handicap is a big thing for small yards, so you better believe he’ll have her in top condition.

I don’t think this race is good, which might surprise some people as it has some Group winners from big stables. But, when you look into the form, for the majority of them their form has fallen apart. Personally, I think this is TRILLIUM‘s to lose and the only way she loses this in my opinion is if she doesn’t get a clear run or she doesn’t handle the dip.

I think this is a special horse in the making for the Richard Hannon team. She was impressive at Goodwood but then beating The Platinum Queen at Doncaster over 5f showed that level of filly we are dealing with. The Platinum Queen is a very quick 2yo sprinter, shown by the fact she finished 2nd in the Nunthorpe behind Highland Princess. That is easily the best form in this race, and with this extra furlong, she should be tough to beat as she stays the 5f out very well and is definitely in need of the extra yardage.

For the others in the race, I think they are quite flattered that they have ratings as high as they do. Meditate is rated 112! which is a bit bonkers to me. She is clearly a good horse, but the form of her last win at the Curragh ahead of Olivia Maralda is hardly special. The runner-up was rated 94 and has since been pummelled (yesterday) in a Group 2, finishing 9th/14. That might not be the true running by her, but that doesn’t look like great form to me. Swingalong might be fancied with her win at York at odds of 20/1, but once again the form doesn’t look great. The runner-up, Queen Me recorded an RPR of 96 in her next run, and she was only beaten a neck by Swingalong, so if the form was strong you’d be expecting her to win a Group 3. I think Juliet Sierra could be the dark horse in the race who could potentially cause an upset. Ralph Beckett normally has some good 2yo’s and at 10/1 I can see why punters would want to go EW on her, but realistically this is Trillium’s race to lose.