India have equaled Pakistan’s record for most T20I wins in a calendar year after their victory over Australia on Friday. India have a chance to break the record on Sunday in the series decider. 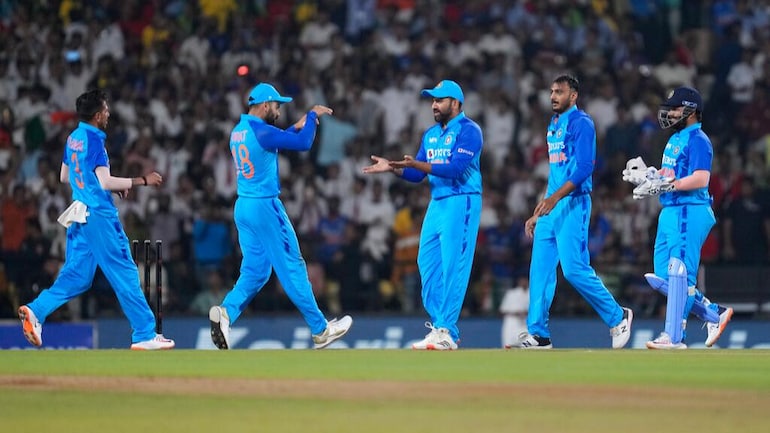 India have equaled Pakistan’s record of most T20I wins in a year after their six-wicket victory over Australia on Friday in Nagpur.

The match was a truncated one after there was a big delay due to a wet outfield and the game was reduced to just eight overs per side.

Having won the toss, India chose to bowl first and Aaron Finch got off to a flyer for the visitors. However, Axar Patel applied the brakes on the other side and the pressure led to the run out of Cameron Green first. The left-arm spinner then picked up the prize scalps of Glenn Maxwell and Tim David in quick succession.

Jasprit Bumrah picked up Finch to put the Aussies on the backfoot, but Matthew Wade continued his good form with a 20-ball 43 to power Australia to a strong total of 90 for the loss of five wickets in eight overs.

In response, India got off to a blistering start with Rohit Sharma leading from the front. The Indian skipper took the attack to the Australian bowlers, with Josh Hazelwood going for 21 runs in his first over. Adam Zampa came in to put the brakes on India’s run chase as he wrecked the top order and picked up the wickets of KL Rahul, Virat Kohli and Suryakumar Yadav.

Hardik Pandya’s stay at the crease was also short but Sharma kept on going as he pushed India towards the target. The skipper found some help from Dinesh Karthik who finished off the game in just two balls as India won the match by six wickets.

With the win, the Indian team went on to equal Pakistan’s record of most T20I wins in a calendar year. Babar Azam and his men had 20 wins in 2021.

India will have the opportunity to break the record when they take on Australia on Sunday.