That it exists at all — and has become such a highly sought after trophy — is thanks to the man behind it: jewelry designer Kenny Hwang. Hwang spends most of his time making statement pieces for clients like Givenchy, Alexander McQueen, Donna Karan and Ralph Lauren, where they’re usually seen on the runway instead of the ballfield. But when MLB came to him with an idea to make something new and different for the 2019 Home Run Derby in Cleveland, well, Hwang jumped at the opportunity.

It almost didn’t happen, though. Hwang was brought on board extremely late in the process and had to go into a crazed frenzy to get the piece finished.

“Basically, I worked like a month and a half in two weeks,” Hwang told me in a recent Zoom conversation.

That wasn’t the end of it, though. He was still finishing the piece in his New York studio long after he could ship the piece to the All-Star Game, and even after most league employees had flown out to Cleveland. There was one employee left in the accounting department who was on the very last flight out to the Derby. It would be up to him to deliver the piece.

Fortunately, it all worked out. Pete Alonso crushed dingers into the sky, won the Derby and got to rock the very first Home Run Derby Chain in existence. 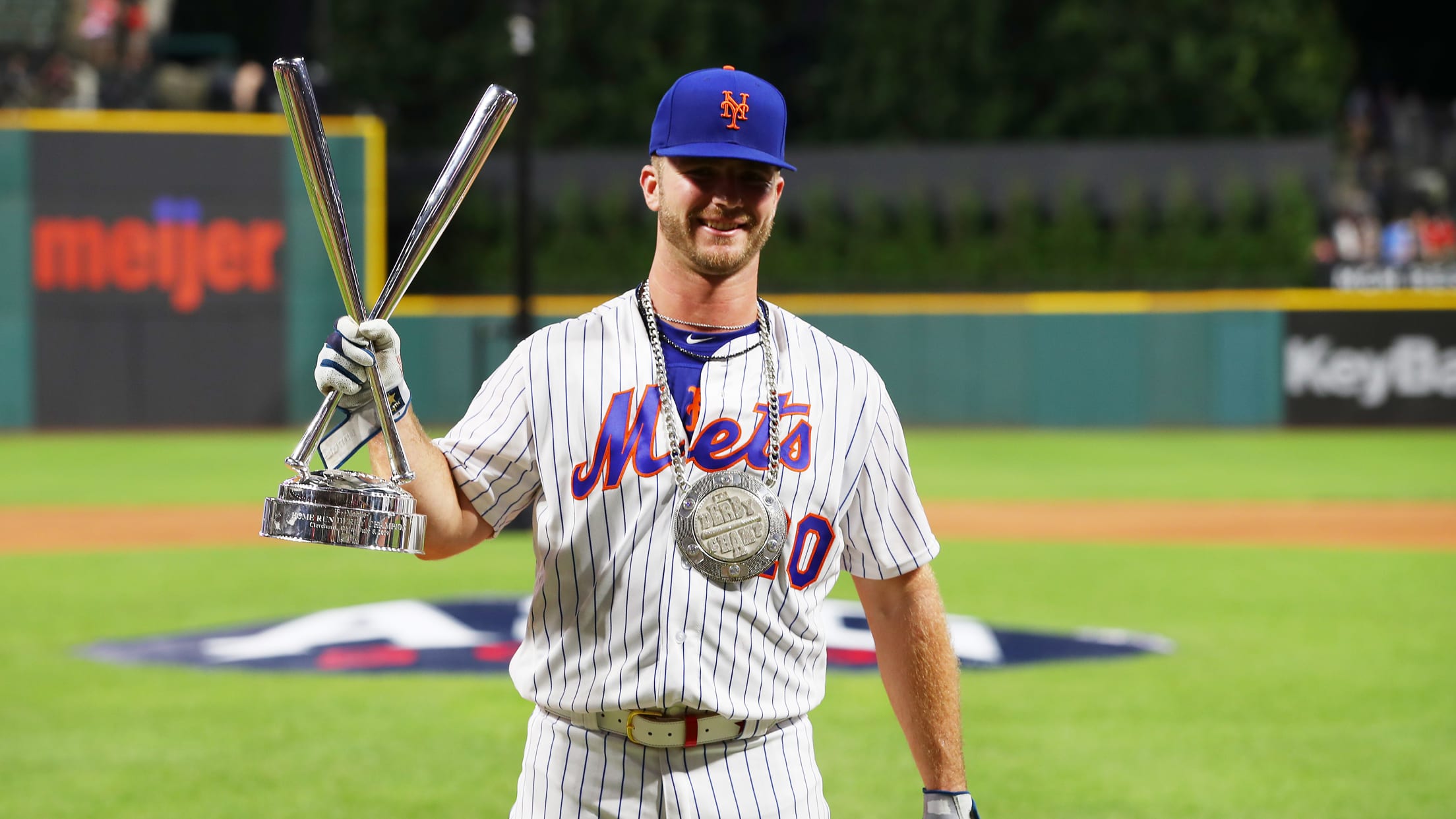 For the 2021 All-Star Game in Colorado — the 2020 ASG was canceled due to Covid-19 — Hwang brought in a baseball-field design and a few subtle Rockies mountain motifs.

“[For the second] year, it was like, ‘OK, how do we top that?’ So, back to the drawing board — I worked with [MLB designers] Xavier Murillo and Matt Massarelli — and we came up with the baseball diamond shape. They always kind of try to match it with the place where the game is. So, last year, it was Denver. Because it was mountainous [we made some mountain-like shapes], so it was very subtle, but definitely purposeful. Not just making pieces for the sake of making pieces.” 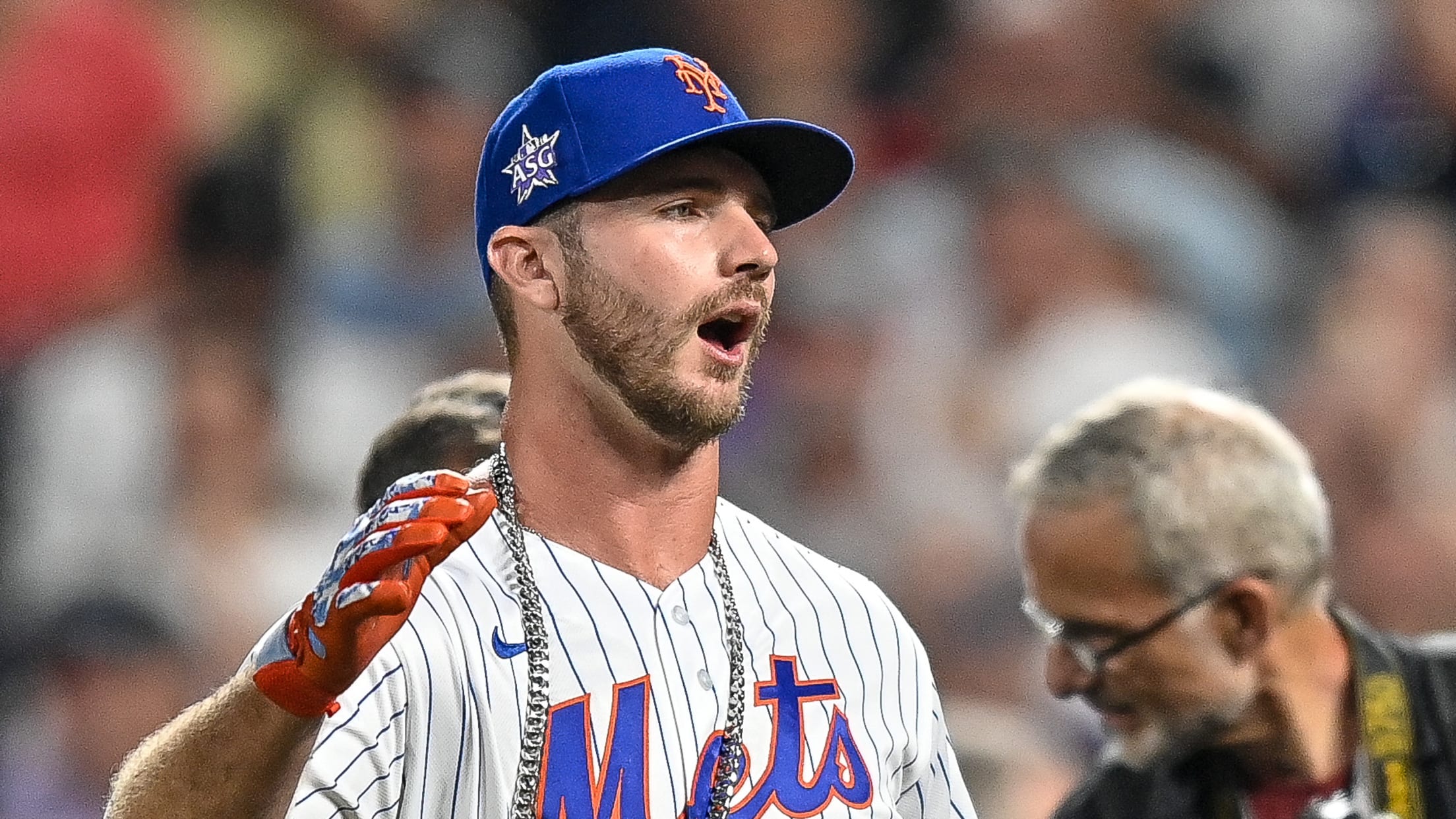 For his third piece at this year’s Derby, Hwang wanted to step out of the box and really show off his skills. Forget placing the design on a background, why not make the whole thing a baseball? And then why not have the Derby Champ logo look like a cartoon forged in gold?

“So, there’s like a royal blue thing going on,” Hwang said, noting the connection to the Dodgers’ legendary hue. “One of the thoughts was to powder coat the ball, which is a process they use for like, making cars and appliances. That’s what’s fun, right? It’s taking different fabrication techniques and combining them in jewelry, like, ‘Who does powder coating that way?'”

He also has to think about building pieces in a totally different way than he ever has to for the runway, simply because of how people will see his work.

“So, on a runway, you’ve got a good maybe 40 seconds, 60 seconds of focused camera time, and then they’re getting close ups, different angles,” Hwang said. “But with this, it’s a few seconds at a time. And it’s random, so we don’t know what angle it’s going to be looked at. The key is that no matter what angle you look at it, it sends the message in less than a second.”

It’s clearly worked, though. While the Derby bragging rights and cash prizes are nice, the players are clearly thrilled when they put on Hwang’s bold and fun designs. It’s something that makes all the hurried nights worthwhile for the designer.

“What’s great for me is just seeing how much fun everyone’s having with it,” Hwang said. “That’s really the best part.” 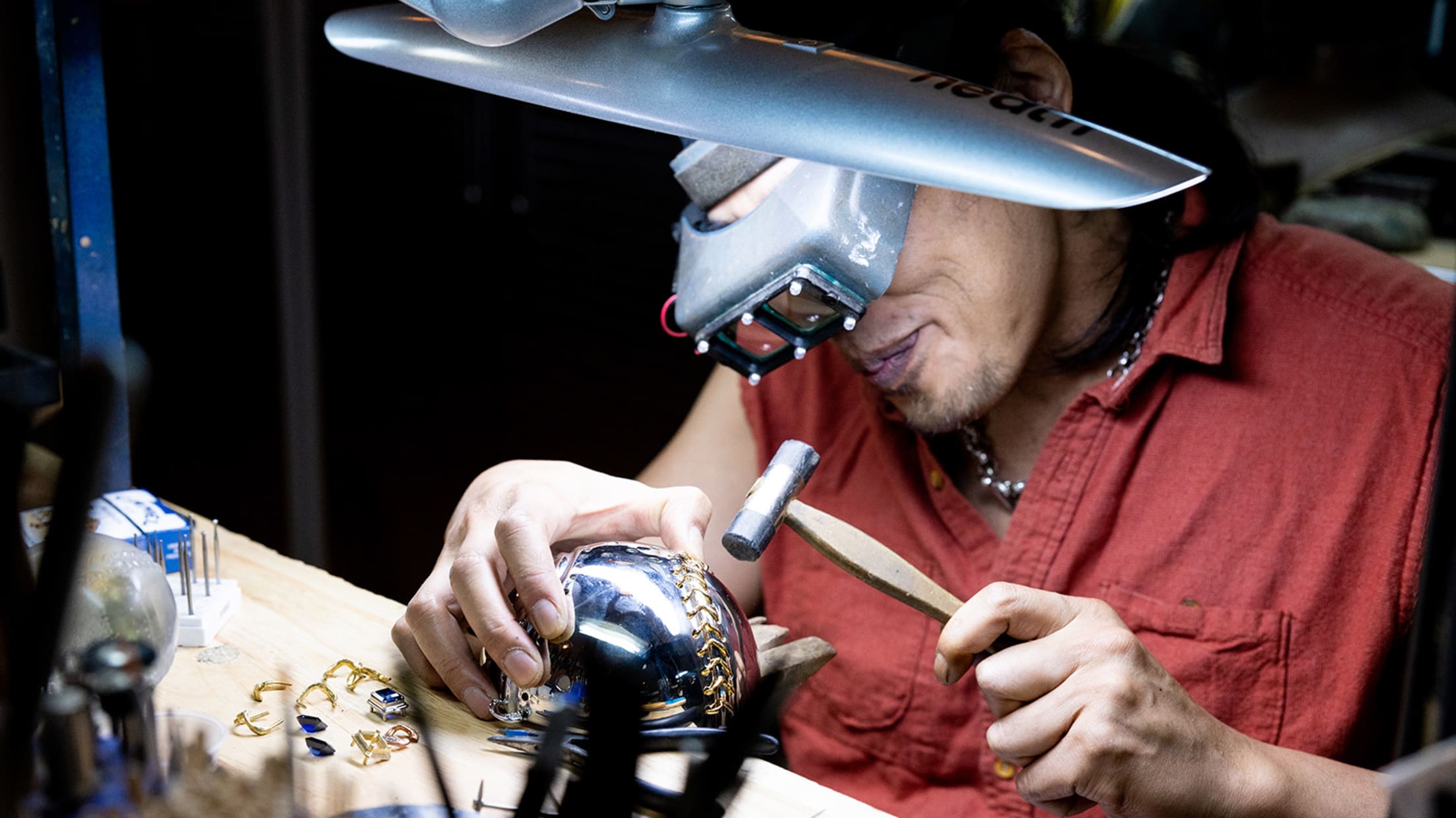 With chains and jewelry having blown up around the league during the last few years — perhaps inspired in part by Hwang’s Derby work — we thought it only right to get the designer to share his thoughts on some of the best pieces in the sport.

Here are his thoughts below.

Note: Portions of the interview have been condensed for clarity and length. 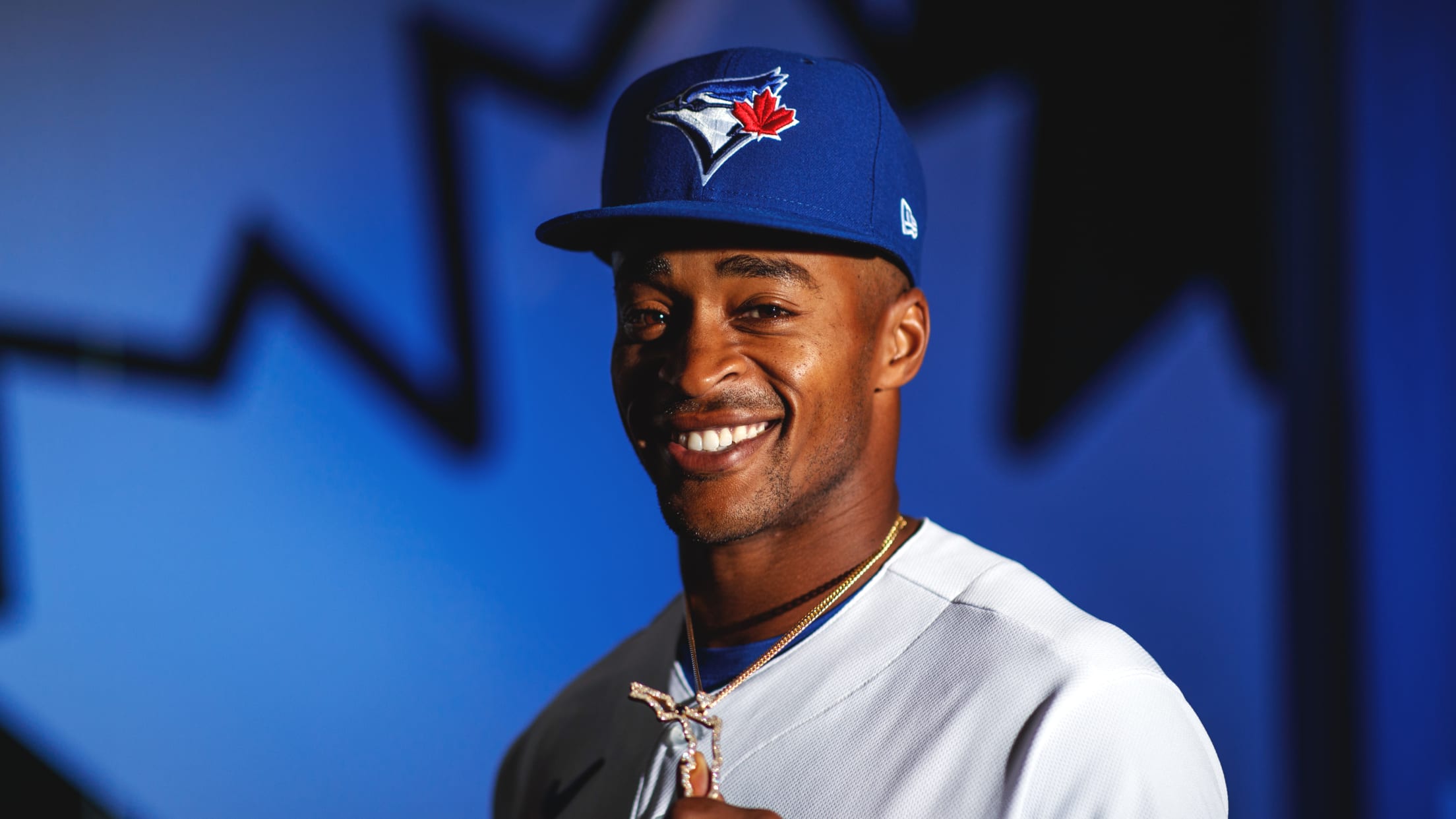 One of the reasons Hwang loves making custom pieces for people is because of that personal connection they have to the piece.

“When you’re making a custom piece for somebody, it’s usually something that’s very personal to them, and sometimes it could be a state. With the players, I’ve noticed they will get chains that represent something that has to do with the game, with their team, or their jersey kind of thing. That is sort of the main thing that I see. Personally, I’d like to see more color involved.”

“In sports, I think there’s a lot of ritual and maybe they’re kind of superstitious in some way, so it’s like, ‘I do good when I wear this.’ I think a big part of the human psyche is feeling this connection to something that’s important to you. And that’s what that looks like to me there. That energizes you, that pushes you to do better.” 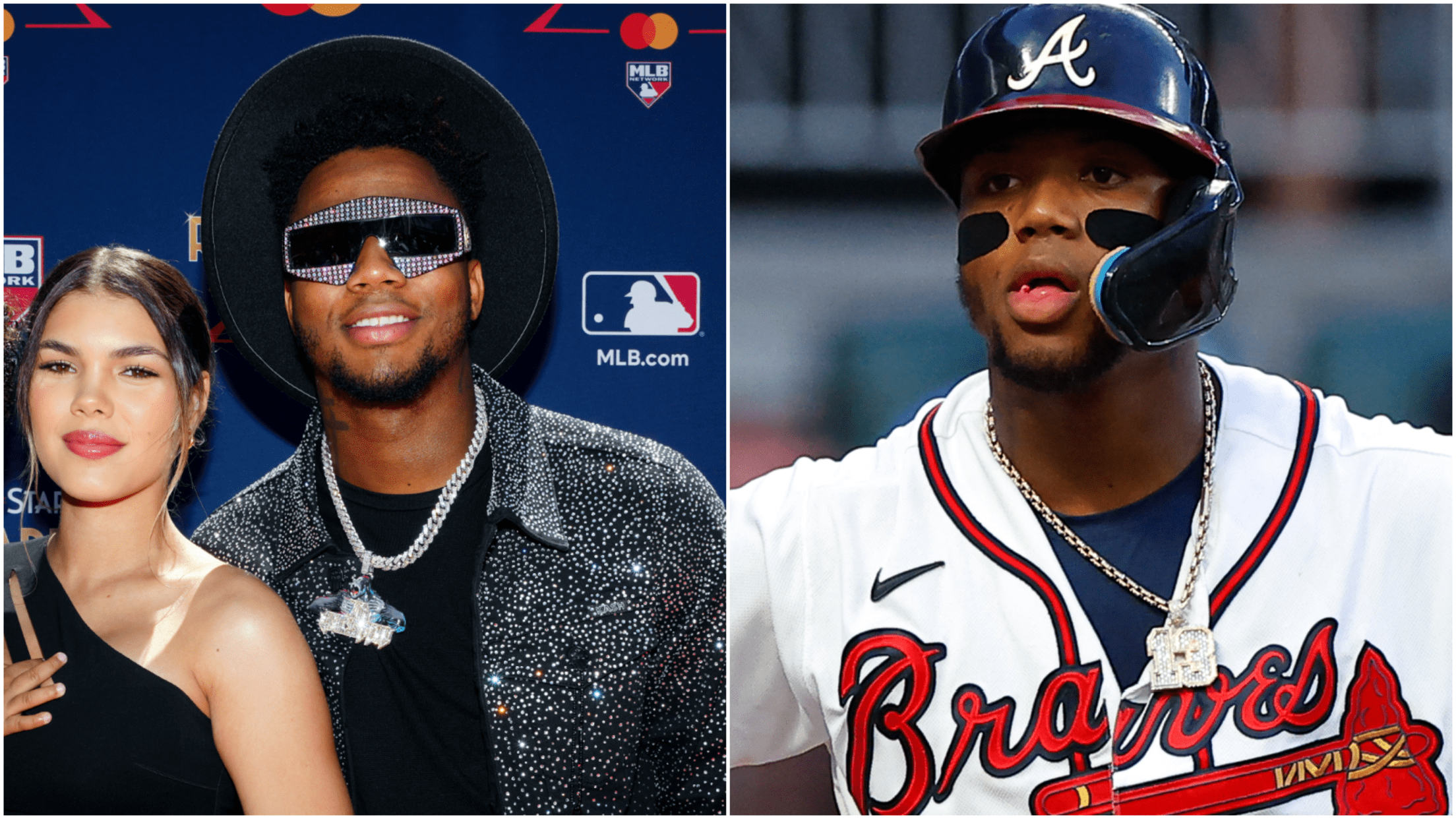 “So, he’s a jewelry lover, he loves the fashion of it. That’s what all this shows, it’s just variety. I mean, he went out and commissioned someone to make these things. It takes time, like, you’re not just going into a store buying something. You’re sitting down with someone and saying, ‘OK, let’s do this or that,’ and looking through a bunch of different things.”

While Acuña really stood out on the All-Star Game red carpet, his usual piece is a large, diamond-encrusted No. 13 — something many players around the league like to wear. Hwang admits that he would love to help make a player’s jersey number really stand out.

“The thing I’ve thought about is how cool it’d be to make the custom pieces personally for the players — just because there’s so many ways to go. And taking them through the process, like, ‘What do we want it to say? What’s the theme? What things are important to you? What are we trying to convey?’ And coming up with something completely original based on a number — there’s definitely ways to do that.” 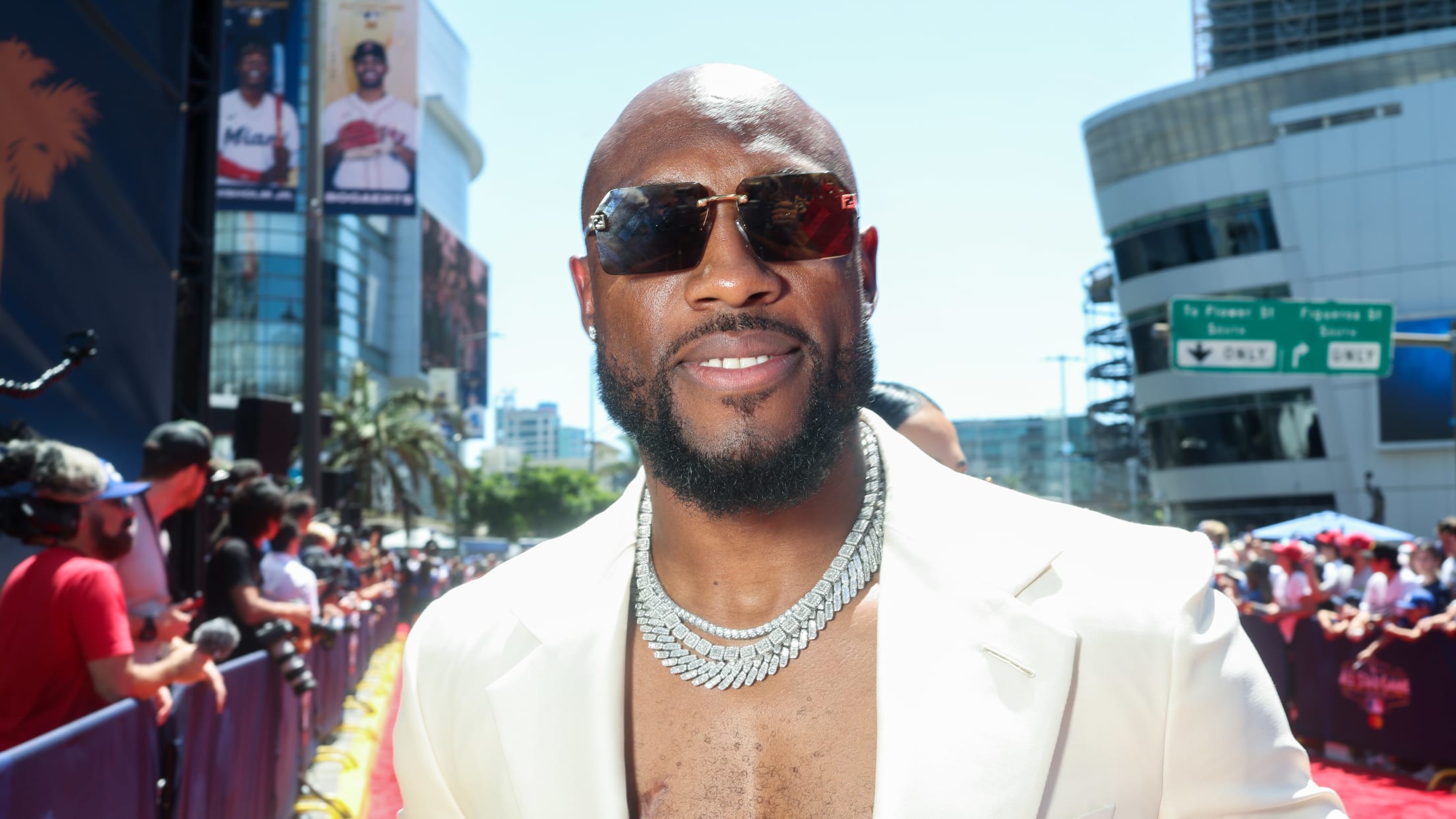 “He’s an accessories guy. He’s piling it on there. I mean, I think the picture says it all. Anyone can get the outfit. It’s like, what can you do from there to personalize it? And accessories is the answer. So with men, since the clothing has been getting more important, accessories become the next logical step.” 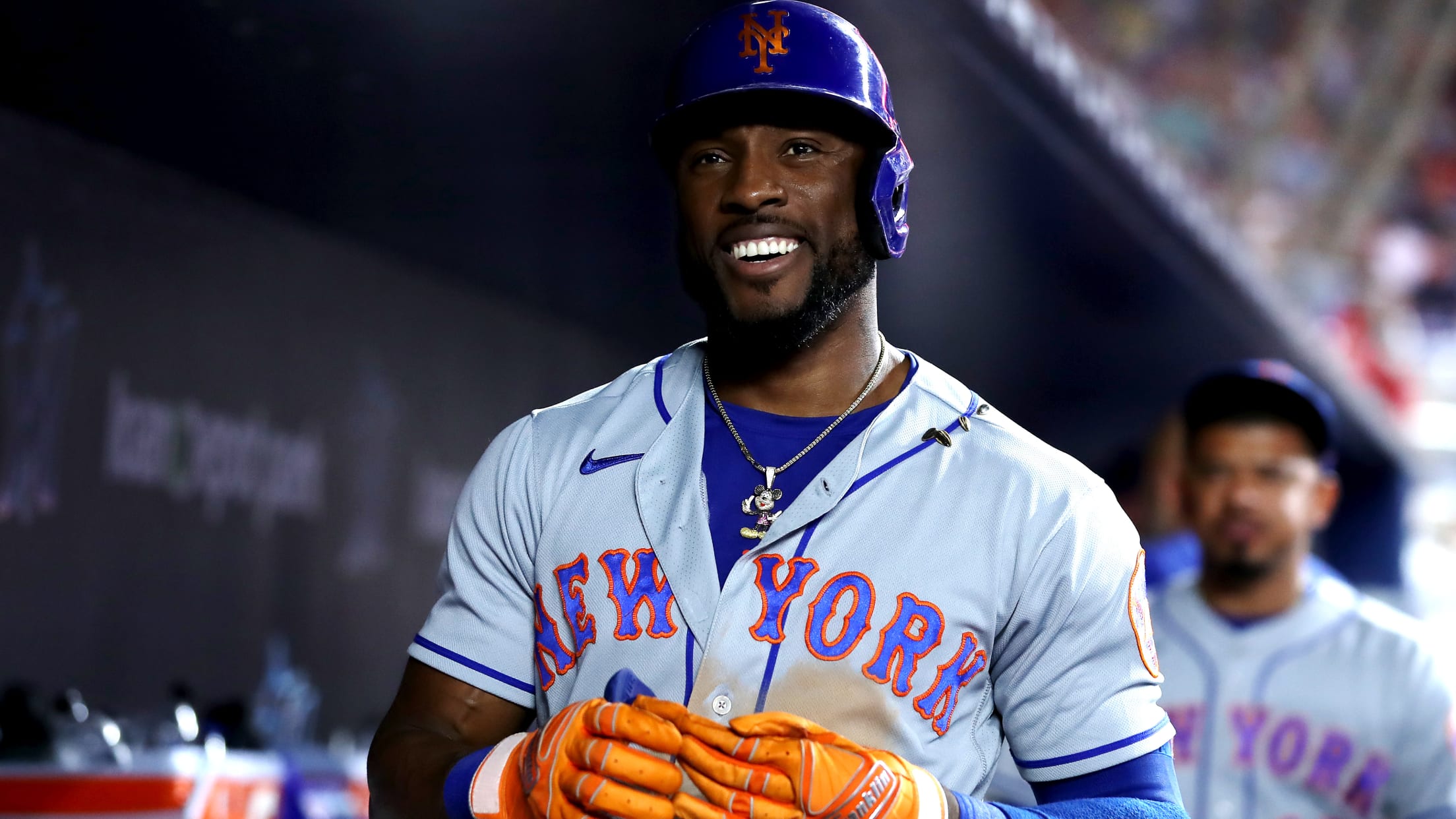 “I love the humor behind it, the lightness. The fact that it’s Mickey Mouse and it’s something so playful and it’s a cartoon and it just looks like a toy! The beauty is that it’s completely not a toy. It’s freaking stone encrusted! That’s what I love about it. It’s playful, but it’s not.” 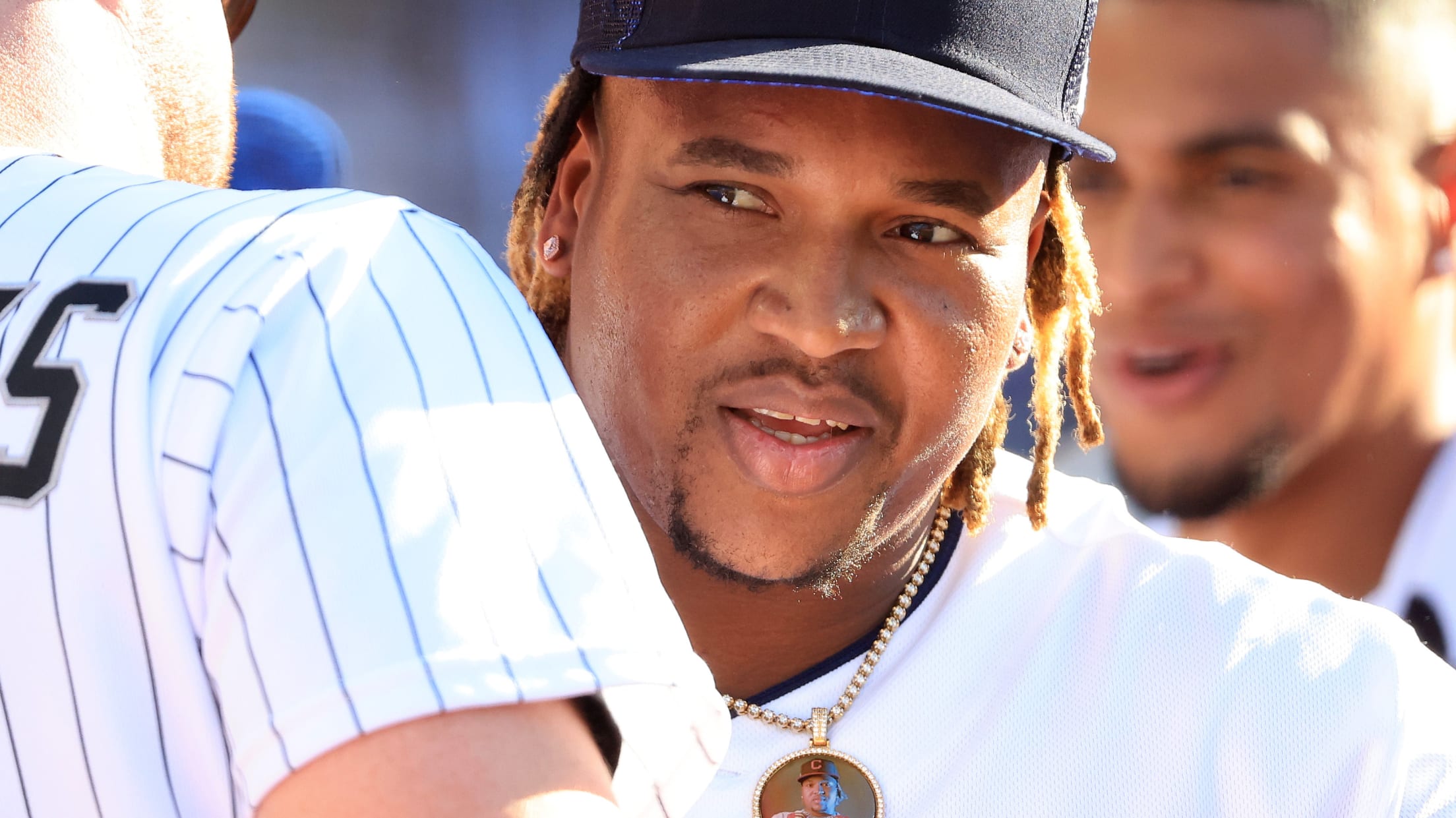 “That’s great. It’s in case he forgets what he looks like, right?”

While Hwang loves the piece, he admits it would look vastly different if he got a chance to make it — something he hopes Ramírez might reach out to him for in the future.

“That looks sort of photo-etched, like laser-engraved. I think that there are different ways to represent a person. For me, what would be really great is doing the old carved intaglios. They’re like these Roman, carved semi -precious stones. It’s sort of like the male version of a cameo. The cameos are usually round, but intaglios are more rectangular or square and it’s like a carved face.

“[I would carve his face] into a semi-precious stone, like a sapphire or something crazy. We’ll get a giant black diamond. That’s where I would go with it. If you’re gonna go there, let’s go for it.” 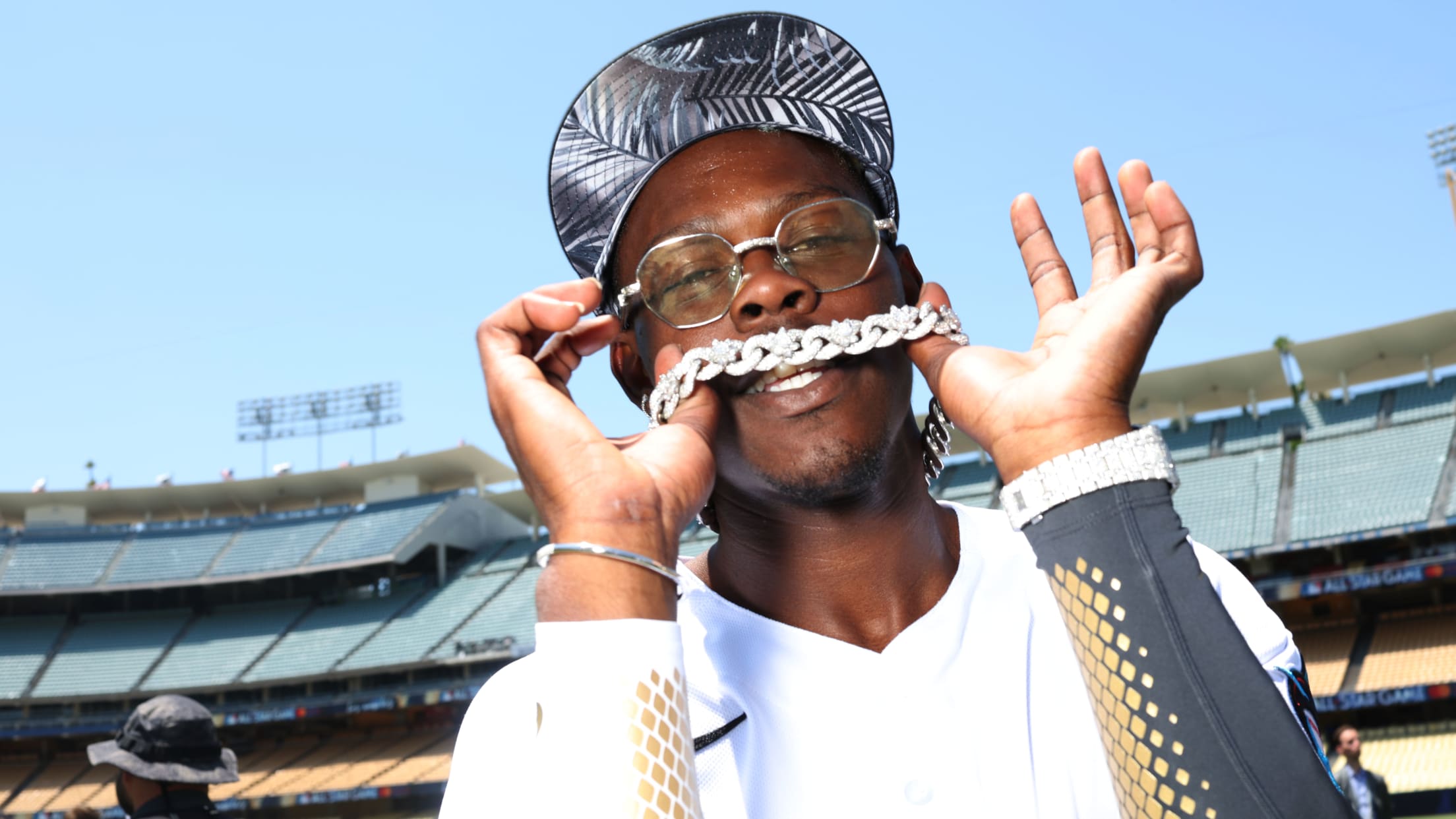 “He’s definitely proud of his chain. That’s actually a really nice blinged out Cuban — they’re not always that nice. That’s a pretty fancy one, actually.” 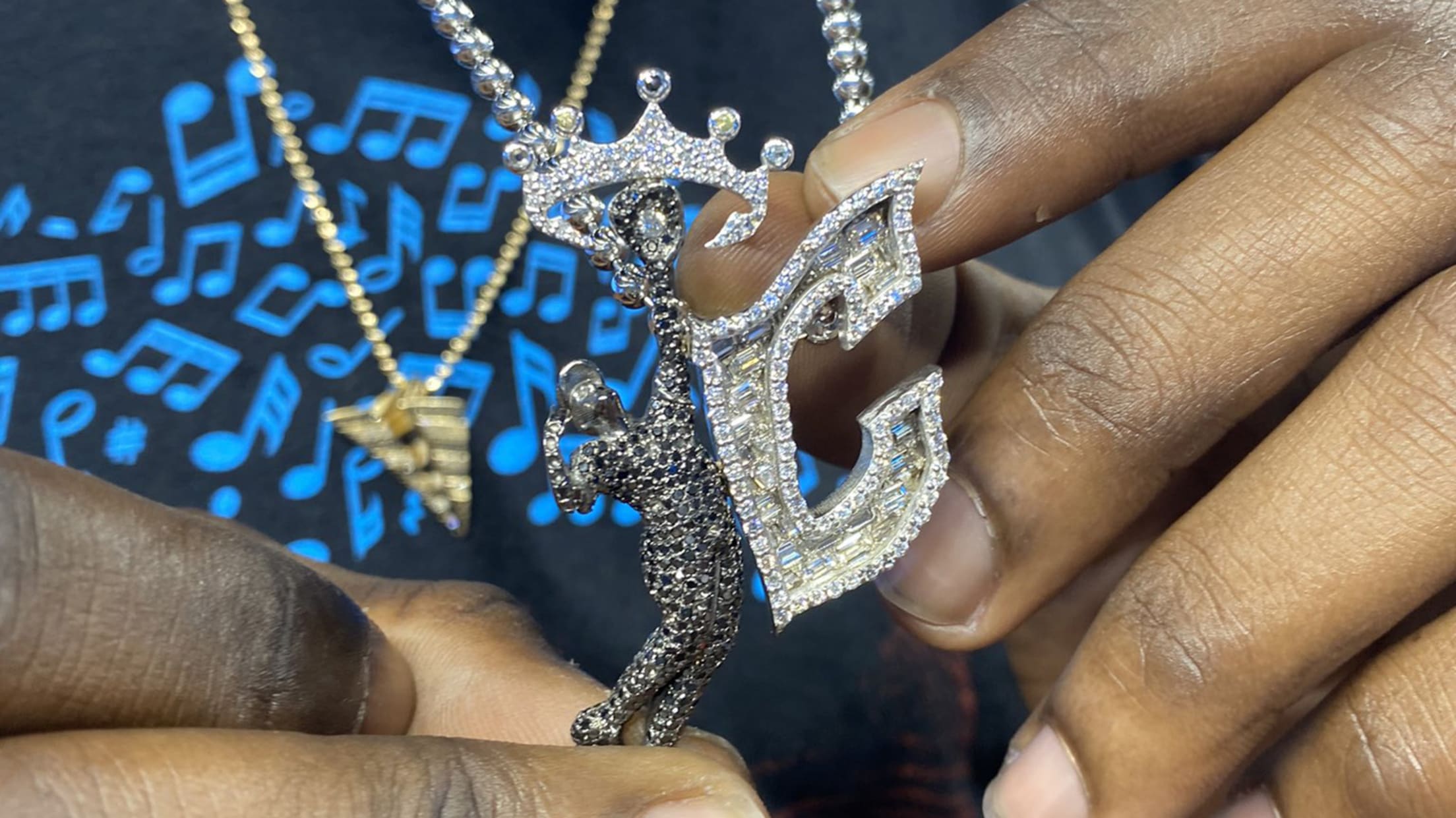 While Hwang liked the Cuban chain, he was a big fan of this piece, which was based on a highlight-reel play Chisholm made in 2021. Hwang noted the black diamonds and the crown as elements that stood out, but he had a few thoughts on how he would approach the piece if he had a chance.

After getting a few key words from Chisholm about what he wanted to highlight, Hwang would get to drawing.

“Then it’s about me coming back and doing a bunch of sketches or CADs, so you can get a 3-D [view]. One of the things I really like is dimensions — if you look at that piece, it’s more of a front-view piece. I’m really into things that look like something from every angle. So, something like that I could see making in 3-D. But they have to be able to play too, right? So it can’t be like this huge thing hanging off your neck, like, knock your teeth out.”

Although Pederson is no longer on the Braves, his legendary pearls — which now reside in the Hall of Fame — really stood out to Hwang.

“Pearls on a man? Love it. You don’t think about that. You don’t associate the two things, but look at how great that looks! It goes with every outfit. He’s stepping out of the box and not afraid to do it. I love that. I think this was gonna be my number one pick.” 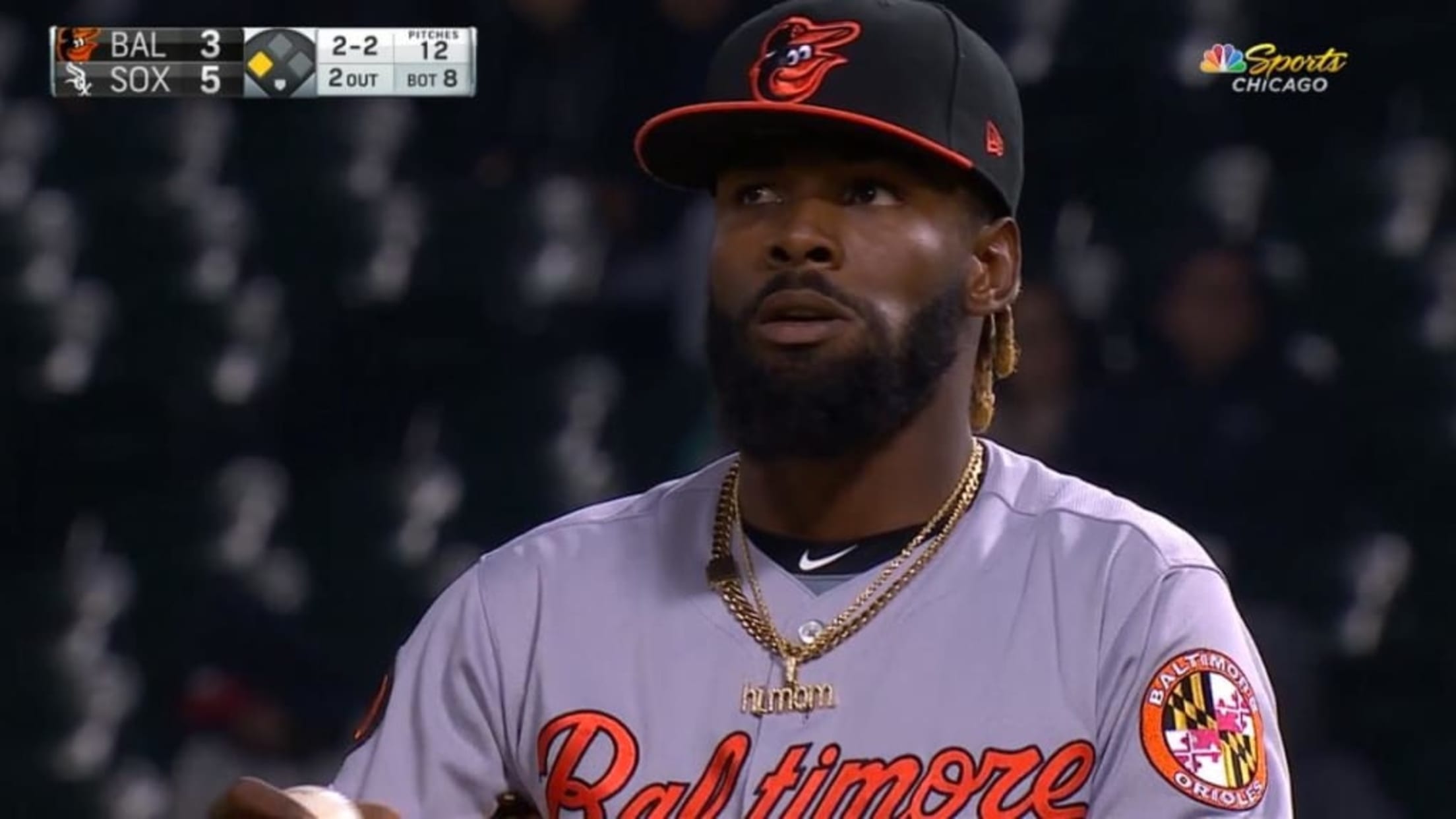 Finally, before we let him go back to working on his next couture piece, we had to share an older chain that Miguel Castro wore while he was still on the Orioles. Not surprisingly, Hwang really enjoyed this one.

“It’s important that his mom’s with him. It says a lot about him. It’s gratitude and love and appreciation. And it’s pretty vulnerable, actually. It’s super personal sharing that with the world.”