A 19th century Scottish golf club has set up a crowdfunder as rising costs have meant that its income no longer supports its expenditure.

Newburgh-On-Ythan Golf Club in Aberdeenshire, one of the oldest golf courses in Scotland, says it is “looking for donations to help stabilize and secure the future of the club and allow us to recruit and promote the club to the wider community, and visitors from the UK and beyond.”

It hopes to receive at least £5,000, which should ensure that the club continues to trade for the rest of 2022.

The club, which has been in existence since 1888, and was where the King of Siam (now Thailand) from 1910 to 1925 learned to play golf, says “after two and a half years of the pandemic and the financial constraints that came with it , combined with the increased cost of energy, equipment and course materials, the club finds itself in a position where current income cannot support the expenditure. 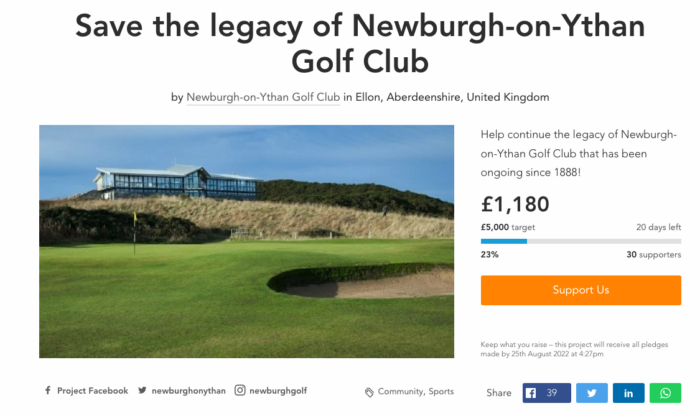 “In the first instance the money raised will go to ensure that the club can continue to trade for the remainder of the year, is stable and that fixed expenditure can be met. The additional raised will go into significant efforts to recruit new members and attract visitors from the local area, rest of UK and overseas.

“Any surplus money left over will act as a buffer to help support the club, allow us to complete vital projects such as irrigation and welfare facilities for staff and to avoid utilizing overdraft facilities.”

Newburgh-On-Ythan is currently an 18-hole course with a six-hole course attached for beginners.