DUBLIN’S Hannah Tyrrell has called for a rule change in ladies football to allow more physicality.

Deliberate physical contact in matches is currently not allowed.

Referee Maggie Farrelly was constantly blowing frees during Meath’s 3-10 to 1-7 All-Ireland final victory over Kerry last Sunday at Croke Park — and former Ireland rugby star Tyrrell says something has to give.

She said: “You don’t want to turn it into a free-taking competition.

“It’s just been, as a player, very frustrating recently to see the inconsistencies in refereeing and it’s hard for referees because they’re playing by the rulebook to some extent.

“But some referees are viewing it very differently to others. 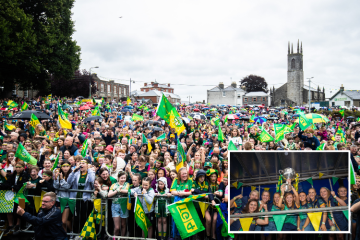 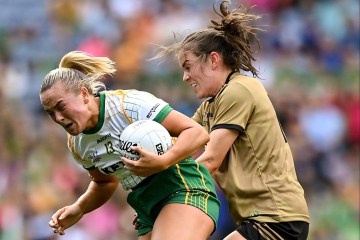 “I think the game has changed over the last couple of years and I find that a lot more teams are in the gym and a lot stronger than maybe they were in previous years.

“One referee might let a lot of contact and physicality go and another ref will barely let anything and that can be quite frustrating for players. I would like to see a bit more physicality allowed into it.

Most read in GAA Football

Tyrrell turns 32 next week and says he plans to stay with Dublin for 2023 after a disappointing season.

They were stunned 3-7 to 1-7 by Donegal in the All-Ireland quarter-finals last month.

Speculation is growing that their boss Mick Bohan could now depart after leading them to four All-Irelands in a row up to 2020.

The Clontarf man has been linked to a host of vacancies in the men’s inter-county scene but Tyrrell hopes he stays.

She said: “Yeah, there’s been a couple of rumors going around.

“That’s something for Mick to make that decision on and chat to his family about and see whether he steps away from us or not.

“He’s been great to me the last couple of years, brought me back into the fold after my rugby career ended and gave me endless opportunities.

“I really enjoyed having him as a coach and as a manager.

“Look, if that was his last year, and I genuinely have no idea if it was or not, then I’ll be very grateful for that and whoever takes us on next year, hopefully they can do a job.

“But if Mick stays with us I’d be happy, but I genuinely have no idea either way what his thinking is.

“For me the plan right now would be to go back to Dublin and give it another go next year.

“I’ll see how I’m feeling come January, but the plan right now would be to go again.”

Meanwhile, the LGFA have confirmed that the All-Ireland junior final replay between Antrim and Fermanagh will be played at the Athletic Grounds in Armagh on Saturday, August 13 at 5pm.

The game will be televised live on TG4. The sides drew 1-13 each at Croke Park on Sunday.

Cork will face Galway in the All-Ireland minor A ladies final tonight at McDonagh Park in Nenagh, a game which kicks off at 7pm.