DAREDEVIL snooker and darts players – some of which are in their 70s – parachuted from an airplane thousands of feet in the air all in the name of charity.

Members of the George Street Snooker Club, in Colchester, headed to Beccles Aerodrome towards the end of last month before tentatively boarding an aircraft.

After taking off and reaching a nerve-jangling height of 13,000 feet, two groups of six courageously took a leap of faith in aid of St Helena Hospice.

Those who took part in the nail biting parachute jump, aged between 20 and 70-years-old, managed to raise just shy of £4,500 for the end-of-life care organization.

Their selfless efforts also saw them personally thanked by bosses at St Helena Hospice, based in Barncroft Close, Colchester.

Melanie Cox, 40, who runs the snooker club, having worked there more than 20 years attended the jump with her 14-year-old daughter Taylor and a coach of supporters.

She added: “This little team of friends are incredible people with the biggest hearts and they are always behind each other.

“When they jump onboard with a challenge it is always fueled by a recent loss of a loved one or a club member and to honor that person they fundraise.

This is not the first time the daredevil fundraisers have taken on a testing challenge in order to generate funding for a cause close to the club’s heart.

Last year they climbed Mouth Snowdon in Wales for Dementia UK raising more than £2,000, in addition to a pier-to-pier walk earlier this year. 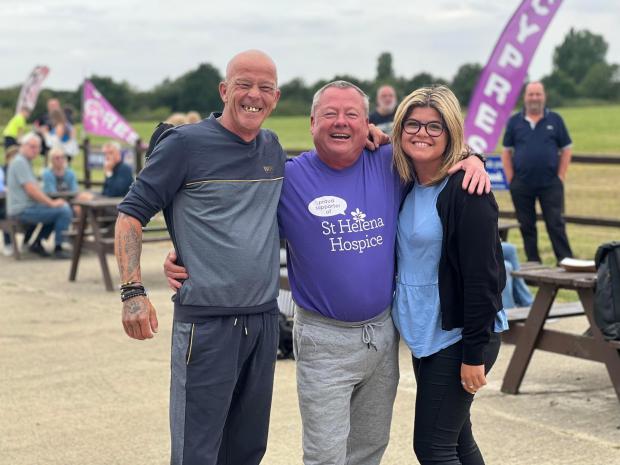 Melanie added: “This little club does endless amounts of fundraising every year, from this team that does the daring challenges to others who run charity darts leagues.

“They inspire each other but over the years they have just become a club family that cheer and support each other.

“This year they achieved their highest amount raised and they just go from strength to strength – they have been amazing.

“What starts with an idea over a drink is always put into action.”