Odessa American Publisher Patrick Canty said the hall of fame selection committee – composed of newspaper staff and community members – reviewed dozens of nominations from the community and selected two storied teams and four individuals to be inducted Nov. 3 at the Odessa Marriott Hotel & Conference Center, which is the presenting sponsor of the gala.

The OA is again partnering with the Odessa Marriott Hotel & Conference Center and the Texas Press Association to create a special moment and place for those who have contributed to the city’s athletics legend.

It’s the second year for the hall of fame and the class of 2022 is just as impressive as last year’s inaugural class.

This year’s inductees include:

Glen Halsell. Halsell was captain of the 1965 team at Permian High School that won the school’s first state title.

He was a linebacker and offensive guard for the Panthers who took his talents to the University of Texas as a linebacker for the Longhorns in 1967, 1968 and 1969.

He was a team captain in 1969, when Texas won “The Game of the Century” against the University of Arkansas with President Richard Nixon in attendance. Texas went on to defeat Notre Dame in the Cotton Bowl to earn the national championship.

Halsell later graduated from St. Mary’s University Law School and has practiced law in Odessa since moving back to his hometown in the late 1970s. 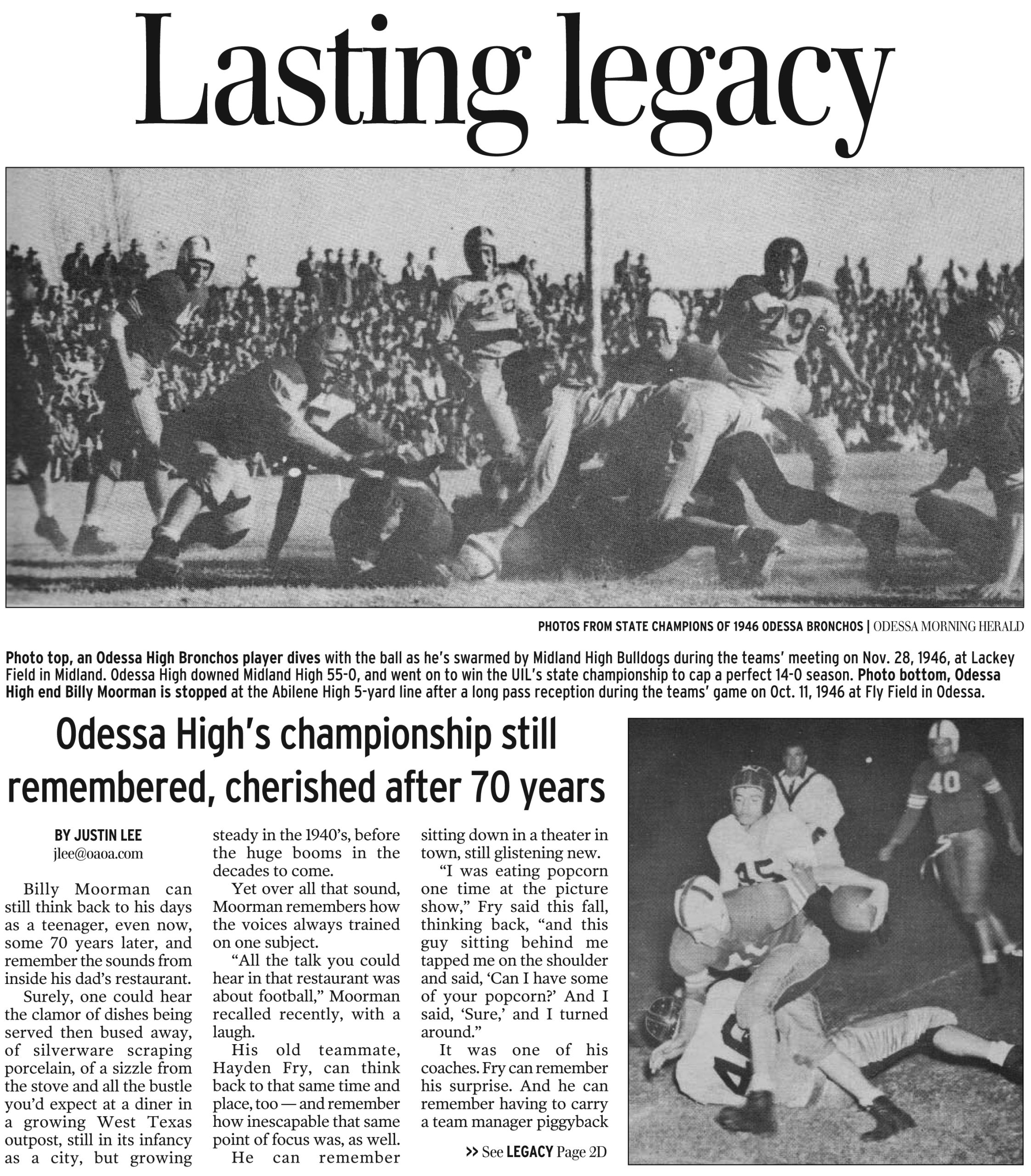 The 1946 Odessa High School football team. The Bronchos defeated San Antonio Jefferson, 21-14, in Austin at Memorial Stadium, in front of a crowd of more than 38,000.

Quarterback Hayden Fry would later go to college at SMU and come back and coach at his alma mater as an assistant coach in 1951 before joining the Marine Corps in 1952. Fry served in the Marines from 1952-’55, and played football for the Marines .

After the Marines, Fry returned to Odessa and was an assistant and then head football coach at OHS but would eventually move up to the college ranks at Baylor University before eventually turning the University of Iowa into a powerhouse in the Big 10.

The team also featured running back Byron Townsend, who gained 124 yards in the title game, scored a touchdown and kicked extra points.

Townsend later went to the University of Texas and was drafted by the Los Angeles Rams in 1952. Odessa High went 14-0 that season and outscored its opponents 430-72.

Jim Watkins. Watkins, the former OC rodeo coach, was the name in rodeo — from competing in high school rodeos in the 1960s to Sul Ross State University and later rodeoing on his PRCA card during the summer.

He taught at Crockett Junior High for 30 years but kept rodeoing until 1984, when he added coaching the Odessa College rodeo team to his resume.

He helped lead the 1989 Permian team to a 16-0 season and state title/national championship.

He was drafted in the sixth round by the Chicago Bears in the 1994 NFL draft and played arena football for the Texas Terror/Houston Thunderbears (1996-1999) and the New England Sea Wolves (1999). 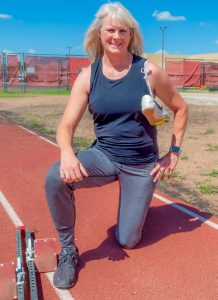 Kerry Evans. Evans was a track star in the 1980s at Odessa High School, Eastern Oklahoma and Wayland Baptist University.

She was a member of the 1985 United States Junior Track and Field team that competed in Korea and was voted most valuable in June 1985.

She still holds the women’s high jump record at OHS. 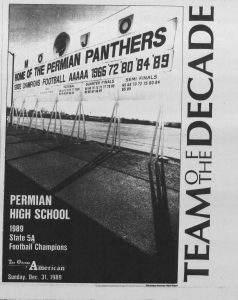 Coach Gary Gaines and the 1989 Permian Panthers state/national champion football team. Gaines is a coaching legend who led the Panthers to a 1989 state title with a team full of talent.

From Lloyd Hill to Stoney Case — Gaines had a dream team. Case would go on to play in the NFL for both the Arizona Cardinals and the Indianapolis Colts.

Gaines made many stops during a 30-year coaching career and was immortalized in the book and subsequent film, “Friday Night Lights.”

Gaines coached both college and high school football teams during his storied career and was eulogized recently as a man who helped teach athletes to believe in themselves.